History of our Parish 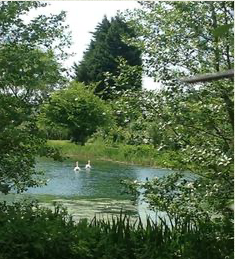 The parish of Lyminster and Crossbush is located between the town of Littlehampton and the South Downs. The two communities are joined by the A284 Lyminster Road and bisected by the A27. Rural in nature they have a rich history going back to Anglo Saxon times centred around the beautiful St Mary Magdalene Church.The two communities have seventeen listed buildings within its boundaries including the Grade I listed church all adding to the special character of the parish.
The village of Lyminster is also in a Conservation Area.
The early history of the parish is bound up with its position close to the Arun river and the fact that it lies at the western edge of a low ridge above the flood plains, close to existing trade routes. There is no evidence of any settlement earlier than the Anglo-Saxon period. The track running from Lyminster to Poling known as the “street” may well have been Roman as it was possible to ford the Arun close to Lyminster.
The first documentary evidence occurs in Alfred the Greats will (c880CE) when he bequeathed his estates at Lyminster and the church to his kinsman Osferth. Very typically minsters were placed on peninsular surrounded by water or marshland. In King Alfred’s will the place was called “Lullyngmynster”- Lullas Minster .We do not know who Lulla was, presumably a local chief. By 930 CE the estate belonged to King Athelstan who held his Easter council here. It remained a royal estate until the Norman Conquest when it was given to Roger, Earl of Arundel.
ST MARY MAGDALENE CHURCH
The nave and chancel of the present church are pre-conquest (1020-1040) with the north aisle having been added in the twelfth century. Although there is no documentary evidence, the minster chancel is very long and believed to be clear evidence of an Anglo-Saxon nunnery. Certainly in 1082 after the death of his wife, Earl Roger re-founded the convent as a daughter-house of Almanesches in northern France where his daughter was abbess. It remained an “alien priory”until their suppression by Henry V in 1414 granted the church and its lands to newly founded Eton College. Eton College are still patrons of the church today, along with the Bishop of Chichester. The priory buildings were south of the present church and on the land now covered by the farm yard. The village was listed in the Doomsday Book as Lolinminstre, where it was listed as having a church, a mill and most importantly, two salt pans. It was valued for tax purposes at £50/-. Sadly nothing can be seen of the medieval village today save for some crop marks in the field on the north side of Church Lane.This area is know as Church fleet tithing but all the houses disappeared by the sixteenth century. However the ditch north of the church and the Knucker Hole was the medieval “fleet”a navigable arm of the Arun which would have been used as a port . There were only 12 houses on the 1875 map including Leominster House and Leominster Court (ancient history thanks to the Rev`d Vanessa Baron, St Mary Magdalene Lyminster). Lyminster House was occupied by the Duke of Norfolk’s family in the 1800s. There is an ancient monument within the parish boundaries north west of Batworth Park house. A Ringwork, an ancient defensive structure comprising a ditch and bank surrounding a raised area. The parish has an agricultural heritage and was largely untouched by the industrial revolution other than its effect on agricultural machinery and the reduction in farm labour. Most of the people living in the early times of the parish were connected to farming activity. After the enclosures act circa 1800, most of the parish was under the ownership of the Norfolk estate. In the early 1900s much of the parish was partitioned and sold to raise money for death duties. The economic activity has always been centred on farming and the parish has several active farms. The area has always been prone to flooding which in turn affects the nature of the farming. It has been known for people to ice skate from the Arun across the frozen flooded pastures all way to Angmering in our colder past. The village of Crossbush had the old A27 running through its centre until the A27 dual carriageway bi-passed it (approx 1993) traveling south of the village and joining the Lyminster Road at the Crossbush junction. This changed the character of the village considerably. The village has a much quieter and tranquil nature now centred around Crossbush Lane. At the beginning of Crossbush Lane is the convent of Poor St Clare and further down the Lane can be seen a selection of cottages interspersed with pastures and stables. The building of the A27 dual carriageway created the opportunity for a petrol station, lorry rest, food outlets and an hotel to be built and just south of this our newest business venture, the Arundel Brewhouse and cafe.
No account of the history of the parish would be complete without the telling of the legend of the Knucker Hole Dragon. The Knucker Hole, a deep chalk spring, is situated adjacent to the footpath from Lyminster Church to Arundel railway station. It is some say, bottomless. The word Knucker can be traced back to AngloSaxon Nicor meaning water monster. The legend goes that the dragon terrorised the parish killing livestock until a local lad Jim Pulk dispatched him with a poisoned pie (there are other versions).The spring is now privately owned and a haven for wildlife particularly waterfowl.

Lyminster and Crossbush Planning applications in the last 14 days

No row returned means there are none at present. This list shows applications registered in the last 14 days. For more applications go to www.arun.gov.uk/planning

All are welcome to attend.